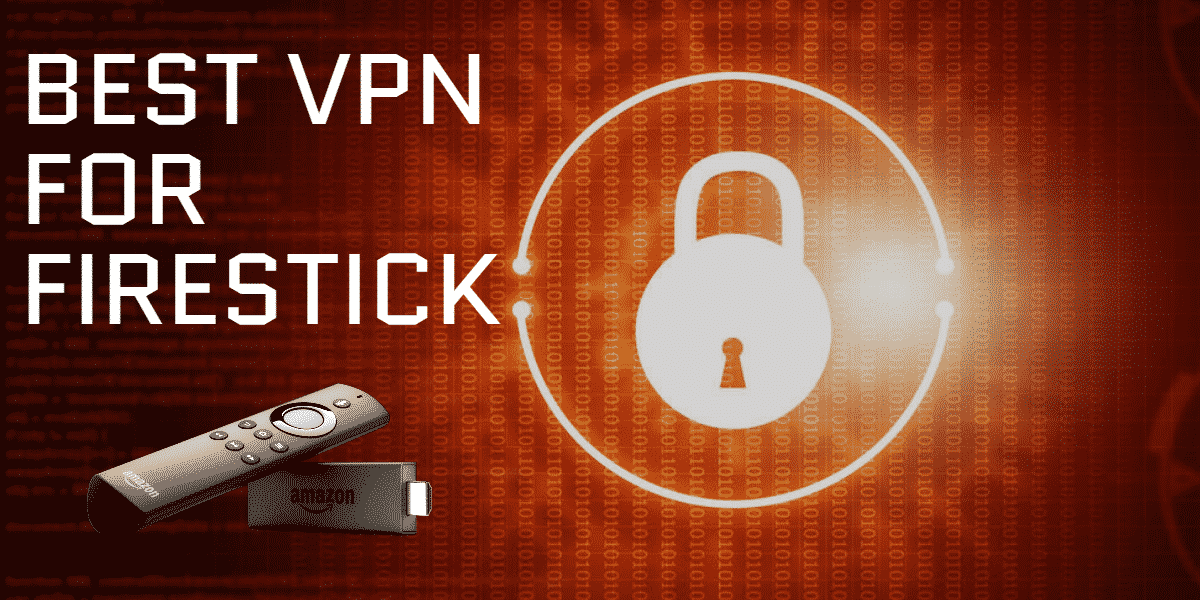 5 Best VPN For Firestick in 2020 | Fast and Secure Streaming

Amazon Firestick has revolutionized entertainment. In fact, more and more people are opting to “cut the cord” and go the amazon way. But as they say, with great power comes great responsibility. So, if you are planning on cord cutting, the first step should be acquiring the Best VPN for Firestick.

The convenience of taking your TV experience with you everywhere you go is fantastic. Not to mention the fact that it’s in a compact flash-drive size.

Amazon firestick is definitely ahead of its time and we love it! More so if you are a frequent traveller like myself, you will appreciate catching up on your favourite programs on the go.

Now, the importance of having a VPN with your Firestick cannot be overstated. You need anonymity as you stream your shows and geo-unlocking capabilities when you are on the go.

So, which is the best VPN for firestick? Here are my favourite picks.

ExpressVPN is a giant VPN provider based in the British Virgin Islands. It not only provides the widest range of advanced features but it also has the neatest array of clients.

ExpressVPN has Apps for Windows, Android, Mac, iOS, Linux, and routers. Of course, the routers require custom firmware. As for the devices that don’t have a tailored ExpressVPN App, you can find super granulated guides on how to manually set it up. They include Chromebook, PlayStation, Fire TV, Kindle Fire, and Apple TV.

The main reason for getting a VPN is protection. So, of course, you want to know if your VPN provider has gone above and beyond to provide the best protection. Well, hold on to your hat. ExpressVPN uses 4096-bit SHA-512 RSA certificate encryption as well as all the top protocols including Open VPN.

Further, ExpressVPN fronts this Perfect Forward Secrecy feature that assigns you a new secret key every time you connect. That’s not all. This secret key changes every 60 minutes you have been online even if your session is still ongoing.

You will love the wealth of advanced features including an automatic Kill Switch, Strict No Logging Policies, Optimized Dns Servers And Split Tunnelling among others.

Plus, ExpressVPN recently launched a tailor-made Firestick App. This baby will cater to Firestick, Fire TV, and Fire TV Cube all 2nd generation and later.

If you have 1st generation or older Fire TV devices, you have two options. On the one hand, you can use MediaStreamer to unblock most of the streaming channels available to the other 2nd gen Fire TV devices. Just so you know, this solution also works for other devices like Chromecast, Roku, and Apple TV.

On the other hand, go for a pre-configured ExpressVPN router. This solution will automatically eliminate your compatibility issue since the ExpressVPN settings come pre-installed.

So, how much will you pay for ExpressVPN?

NordVPN is my number one pick for the best VPN for Firestick. And you are about to find out why.

But before we go there, if you have your ear to the ground, you may have heard about the slight hacking problem NordVPN had in 2018. NordVPN had one of their servers hacked which as expected caused a lot of apprehension among their 12 million+ users.

Well, after much research and consultation, it is my opinion that nothing much was compromised. And this is why NordVPN is still my top pick for the best VPN for Firestick.

NordVPN is a powerhouse when it comes to security. With its one-of-a-kind security features like Double VPN, Onion over VPN and CyberSec technology; you will be hard-pressed to find a better choice for your Fire TV devices.

Double VPN offers double encryption for all your traffic. Onion over VPN presents an extra layer of protection better known as double obfuscation while CyberSec is the ultimate ad and malware blocker. In addition to these features, you will have a Kill Switch, Dns Leak Protection, Strict No Logging Policy And Open Vpn Support.

NordVPN clients include Windows, Mac, iOS, Android, and Linux. Firestick users have a NordVPN native App for Amazon Fire TV devices. All the devices must be 2nd generation or later. If your Amazon Fire TV device is 1st generation, simply download a Remote for Fire TV App. This will increase functionality by helping you to navigate the controls.

Once you have your NordVPN connection, you can enjoy fast speeds, unlimited streaming, and easy geo-unblocking.

Want to see how much NordVPN costs?

SurfShark is one of my all-time favourite VPN providers. Not only is it cheaper than most VPN providers, but it also has more features. Want to find out which? Keep reading.

For one, SurfShark is based in the British Virgin Island. This means there are no laws requiring SurfShark to log information.

Two, SurfShark features all the most secure protocols including Open VPN, TCP and UDP, and IKEv2. There are also other optional encryptions that you can use at your discretion. They include ChaCha encryption for Android and Shadowsocks protocol for Windows. In a word, Shadowsocks is an open source encrypted proxy perfect for bypassing stringent internet gagging.

Windows, Android, and iOS Apps can choose between Open VPN and TCP&UDP connections while Mac and iOS Apps are configured to use IKEv2 by default. Other clients like Linux, Xbox, PS, Fire TV, and Apple TV require some level of configuration. Thankfully, SurfShark offers a wealth of tutorials and installation guides.

Just to clarify, Double VPN Multi-hop allows you to encrypt your data twice as well as connect to several servers in different countries, at the same time. And yes, it is as complicated as it sounds which also means it will be that much more difficult for anyone to spy on you. Smart DNS simply helps you to unlock US content.

CleanWeb ensures your browsing experience is free from Ads, malware, trackers, suspicious links, and good ol’ phishing expeditions. Camouflage Mode is one of SurfShark’s most appreciated features. It fronts special obfuscated servers created to bypass all manner of restrictions. Sadly, Camouflage mode is only available to Open VPN, Windows, Android, and iOS users.

Blind Search is SurfShark’s way of providing an Ad-free browsing experience devoid of logs and those pesky trackers. Noborders Mode is perfect for travellers who end up in highly-restrictive countries like China. This feature ensures you can access any content unabated irrespective of your geo-location. Lastly, Hack Lock is an alert system that let’s you know the moment you have a data leak.

Firestick users can get SurfShark on their device as long as it’s a 2nd generation version or later. They will enjoy all of SurfShark’s features including premium customer support and a 30-day money back guarantee.

Just like in the feature section, SurfShark has some pretty interesting twists in the pricing section too. Basically, SurShark can be bought in three different subscriptions.

Well, CyberGhost is definitely one of the biggest VPN providers right now. It offers 6200 servers in 89 countries. CyberGhost is known for its vast number of servers.

Granted, most of the servers are spread across the United States, United Kingdom, Europe, and Asia. And while we can’t exactly say they have servers in every continent, there has been some effort to diversify.

You can pretty much connect all the devices in your home especially because CyberGhost allows up to 7 simultaneous connections. Typically, the standard is 5 devices, so we are glad that CyberGhost went a tad further.

And even though CyberGhost dropped PPTP and L2TP protocols, you still have Open VPN and IKEv2/IPsec protocols to content with.

Amazon Firestick users have a dedicated App. You can use it as long as your Fire TV device runs on Fire OS 4.6. This App offers a seamless integration, a vast array of server choices, ultimate privacy, and all manner of unblocking.

CyberGhost is relatively cheaper (especially the 3-year plan). But of course, you have to go with a prolonged plan if you want to feel the difference. Short term plans (1-month plan) are in fact more expensive than some of the other VPN providers.

And our final pick on the Best VPN for Firestick is VyprVPN. What can we say about this giant?

VyprVPN has at some point deemed itself the fastest VPN provider in the market. That remains to be seen.

This modest VPN provider, however, does provide a decent service. For starters, VyprVPN offers 700+ servers in 70 countries. Admittedly, this is a bit light compared to the other VPN providers in our list of the best VPN for firestick. But we should not in any way judge VyprVPN’s quality of service base on this.

In fact, if I had to pick the best VyprVPN feature, it would have to be the vast array of clients. This VPN offers Apps for Windows, Mac, iOS, Android, and Routers. You’ll also find Apps for QNAP, Anonabox, Smart TV and Blackphone.

As for the Apps that are unavailable, VyprVPN offers granulated tutorials on how to install them. You will find tutorials for Chromebooks, Linux, Blackberry, Synology NAS, Apple TV, Android TV and OpenELEC. Additionally, you can access DD-WRT, AsusWRT, and OpenWRT just to mention a few.

VyprVPN is an example of what is known as a Tier-1 company. By this, I mean it owns all the servers and hardware it uses and does not rent or involve third-party property in its operations.

Still on servers, VyprVPN has the best server distribution you will see. In fact, it has servers (albeit a few) in almost every continent. There are 14 servers in Asia, 5 servers in the Middle East, 7 in Central and South America, 2 in Africa and 5 in Oceania. Clearly, coverage is much better than even some of the giants of the industry (I am talking to you CyberGhost).

If you are wondering, Chameleon Protocol is a proprietary VyprVPN feature that scrambles metadata of Open VPN traffic making it almost impossible for Deep Packet Inspection bots to identify if you are using a VPN.

Unfortunately, VyprVPN does not have a dedicated Firestick App. However, you can use VyprVPN on Firestick if you are willing to do a little configuring. Essentially, the App you will be using is the native App for Android. Ultimately, you will have to configure your Firestick, Android Phone, Internet connection, and the VyprVPN subscription.

I have to reiterate that after you have installed and configured your VyprVPN Firestick App, you will have a flawless browsing experience. Fast enough not to buff and secure enough to give you peace of mind.

You have the Baseline Tier that supports 3 devices and the Premium Tier that ups the device number to 5. Also, it’s only premium-tier users who have access to Chameleon protocol and VyprVPN Cloud.

Back to the pricing and VyprVPN has three pricing packages.

I still haven’t gotten over the excitement of having my TV in my pocket. This rings true for all TV buffs; those titillating crime shows, am I right? Knowing I can take my TV everywhere and be as safe as ever is very comforting.

Tell us about your choice for the Best VPN for Firestick. Are there other awesome VPNs we overlooked? Let us know in the comment section.